February 2000 – The sub was in floating dry-dock Resolute to repair a seawater system valve.

November 20, 2006 – USS Albany returned to homeport after a six-month deployment

March 16, 2011 – Northrop Grumman has been awarded a contract valued at $25 million for the preparation and completion of a dry-dock continuous maintenance of the Albany, that arrived at Newport News shipyard Tuesday morning. Work is expected to be completed by the end of July. 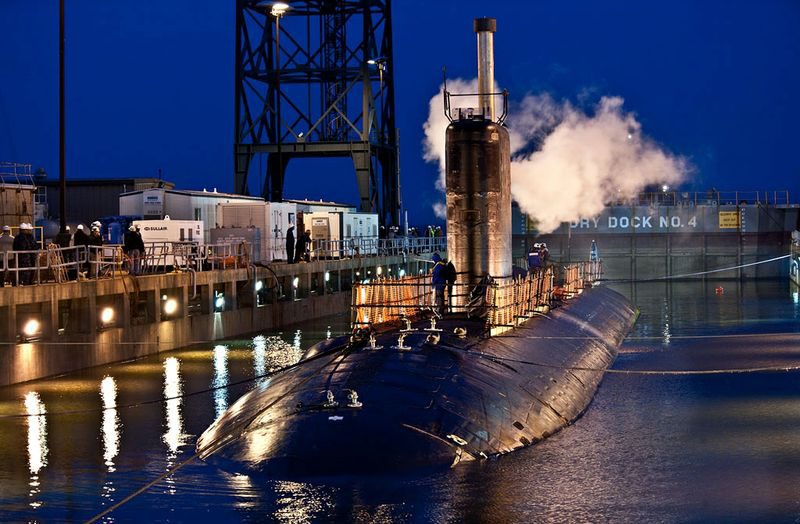 “USS Albany is being redelivered to the Navy today ahead of schedule and on budget,” said Becky Stewart, vice president for submarine programs at Newport News Shipbuilding. “This maintenance availability was successfully accomplished because of the teamwork and talent of the craftsmen and craftswomen of Newport News Shipbuilding, our Navy partners, and the ship’s officers and crew. USS Albany is ready to go back to sea and perform her missions. We look forward to continuing to support the Navy in the maintenance and repair of submarines here and abroad.”

USS Albany was the 18th Los Angeles-class submarine built by Newport News Shipbuilding. The ship’s keel was laid April 22, 1985. The submarine was launched on June 13, 1987, and commissioned into service April 7, 1990. 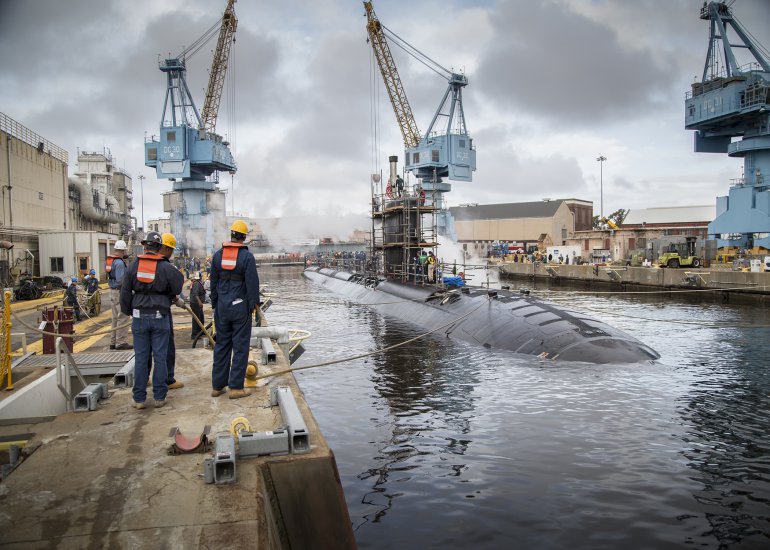 The USS Albany arrived at Norfolk Naval Shipyard on Wednesday ahead of its scheduled Engineered Overhaul.

The work included involves a large modernization package and extensive maintenance to Albany, a 300,000-plus man days availability. The team will be having a complete package done including removing the shaft and the sonar dome for maintenance. In addition, Albany will receive the latest combat systems package currently being developed, a first for NNSY. A package similar to USS Newport News (SSN 750), the Albany team is utilizing the lessons learned in the work being done.

Another first for NNSY is that “USS Albany will be the first to incorporate full Job-Readiness Cells (JRC) and Zone Management from the start of the project,” said Tim Cox, Non-Nuclear assistant project superintendent (APS).

Incorporating the shipyard’s Mission, Vision and Values as well as the three Strategic Goals, the team has prepared diligently for the boat’s arrival. “All Zone Managers and APSs are fully qualified,” said Superintendent Dave Bittle. In addition, the team members have been well-involved in learning cells as well as managing training to be a fully qualified workforce. Their work areas and the drydock is clean and up-to-date, something the group takes very seriously. 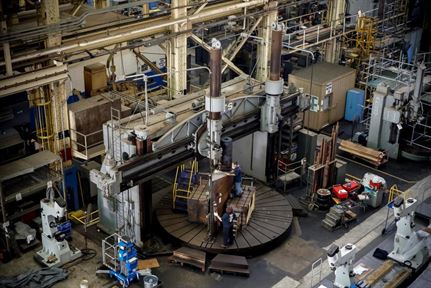 The job started in September 2014 when the rudder was transported to the shop for repair. It was completed last month and is currently in the process of being reinstalled on the Albany. The repair was performed using the shop’s Betts Machine, a vertical turret lathe that has been in the shop since 1928.

The last time the Inside Machine Shop machined a rudder at NNSY was 1991 on the USS Wainwright (DLG 28).

“The same guys who were still here [from the Wainwright job], gave their input on the job and how to do it. They made sure we set it up right,” said Scott Craven, NNSY mechanical group supervisor. “It would have been a lot harder for us if the guys weren’t here to help us. The work itself is unique and it’s rare we have to use this type of machine. So, knowing we had that support made all the difference.”

Albany’s Engineered Overhaul, the largest maintenance event the boat will experience in its operational life-cycle, is comprised of a large modernization package and extensive refurbishments.

“This demonstrates the shop is still capable of doing big, complex jobs like this,” said Mike Johnson, NNSY mechanical group supervisor. “It’s important how we work this job and these younger guys were able to get hands on experience doing this.”

NNSY, a Naval Sea Systems Command field activity, is the oldest industrial facility belonging to the U.S. Navy, and specializes in repairing, overhauling and modernizing ships and submarines. 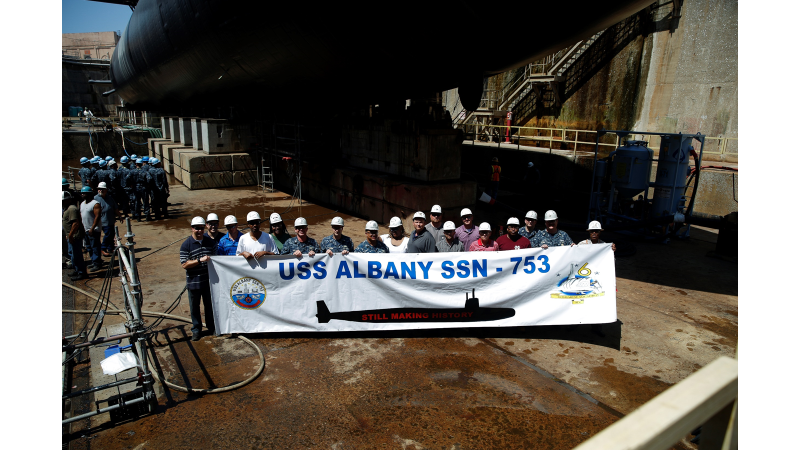 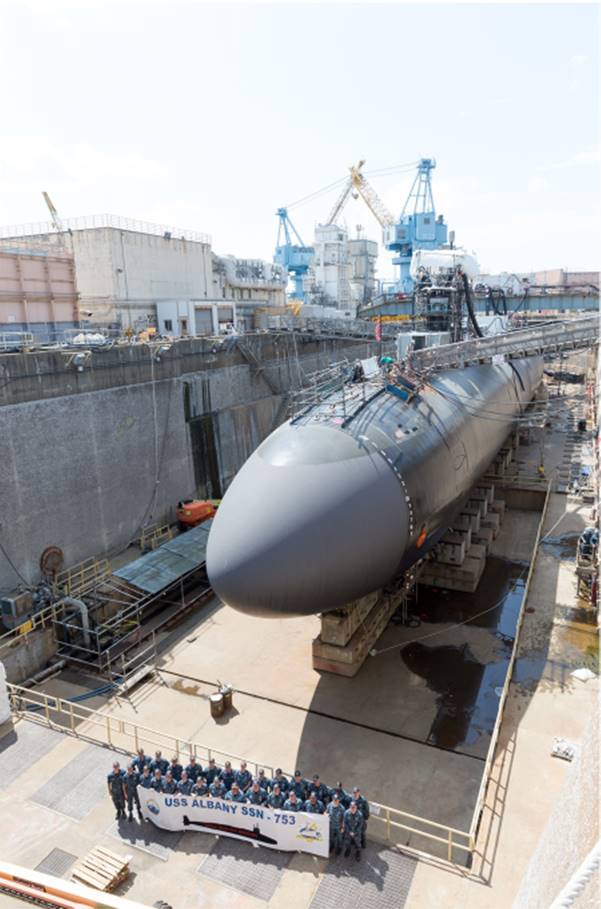 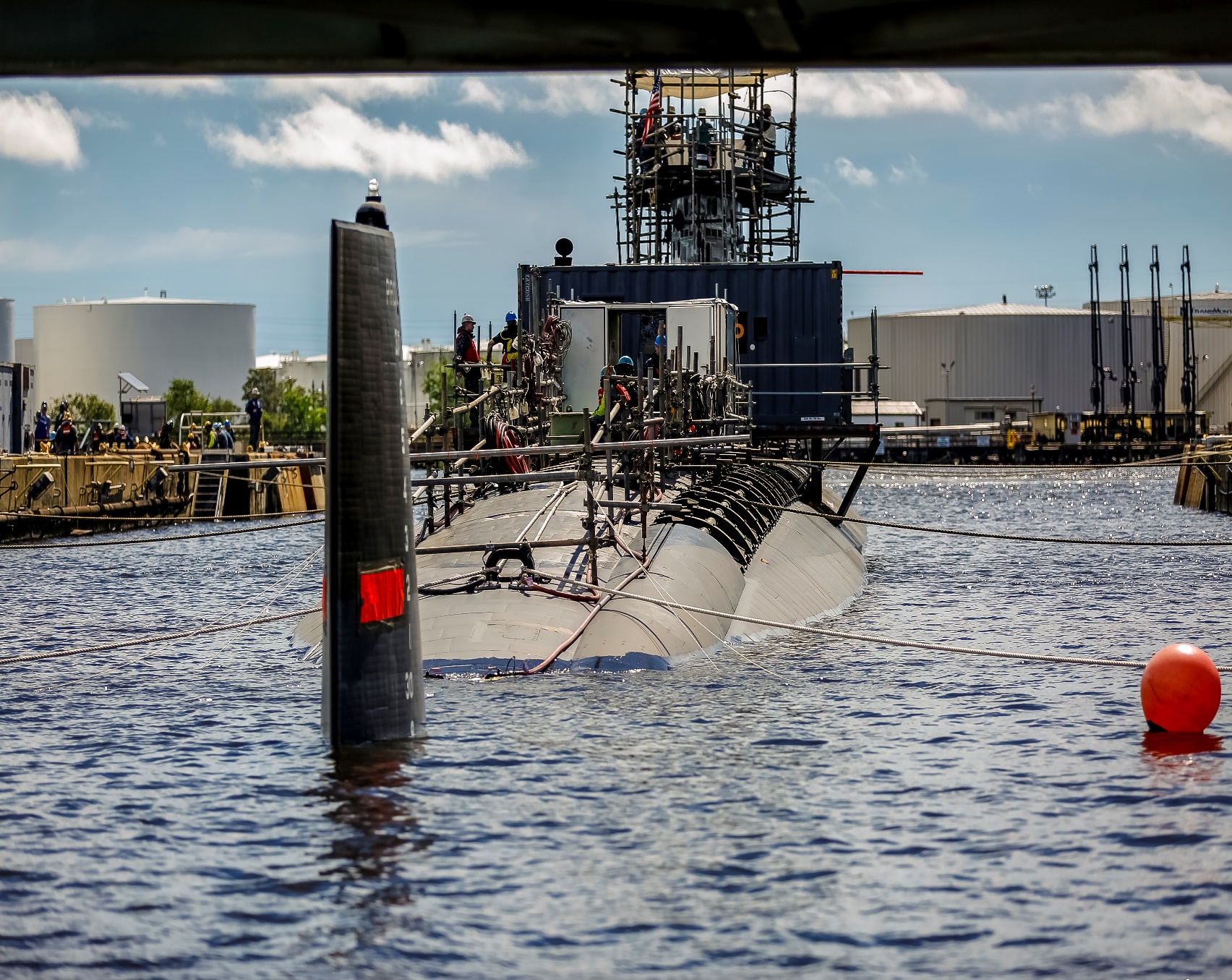 This is ALBANY as her stern crossed the sill of the drydock, where the exchange of responsibility for ship safety, shifts from the Shipyard Commander to the boat’s Captain.

After leaving drydock, Albany moved to pier-side and will continue her updates, crew training and various sea trials. It is estimated that she will not be reassigned to the active fleet until the middle to late 2018.